Home / Making a difference / Charities / Charity: doing it my way

Every year I have chosen a charity for my Christmas donation. Well, two actually – one for animals and one for humans. 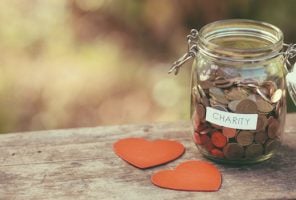 But I must admit, I am getting disillusioned by the tactics some of the charities use to increase my donations.

Envelopes stuffed with cards, pens and labels arrive with increasing frequency. The value of free goods dropping through my letterbox far exceeds my donation!

Then there are the chuggers. The ‘charity muggers’. A few months ago, entering our local supermarket I passed a lady in the foyer promoting Guide Dogs for the Blind. I asked if she was after donations – I had some spare cash on me – but she said, no, she wanted sponsorship for a dog.

Years ago I sponsored a horse for my three grandchildren and I related that my granddaughter had told the teacher her Nanny had bought her a horse! There wasn’t even a flicker of amusement. I moved away from the table and asked about the website. No, they didn’t have a website. It was then she became hostile, trying to entice me to sign up there and then.

When I said no, she was visibly angry.

I went into the supermarket feeling sick and horrible about myself. Was I really such a mean person? I regularly do signings of my book – but I wouldn’t dream of saying anything nasty or even changing my smiling expression if people move on without buying. Why should I? The next person may buy.

For two weeks I avoided my store and was tempted to complain, but I decided against it. I was sure I’d be labelled a Scrooge.

In fact, I am the opposite. I cannot pass a busker or the Big Issue lady. My partner laughs at my inability to pass any collector. But now, after that awful day, I find it easy to pass for fear of getting caught in a further trap.

READ  Book Club: If I Can't Have You by Charlotte Levin

But time passes and memory fades. Recently, I attended a book signing event. It was a large market in aid of a charity, and I was happy for my table money to go to a good cause.

Soon after we arrived another charity arrived to set up opposite. There was no friendliness, small talk was ignored. A mix-up at the entrance resulted in some people entering with money in their hand but nowhere to put it. For two hours much of the cash was put in the bucket belonging to the other charity for want of anywhere else.

When the organisers realised they should have been collecting for their chosen charity the conversation was lighthearted as they resolved the situation but I remarked lightly that the lady in charge of the stand for the other charity had done well out of the confusion.

Her curt reply – “Well, it’s all for charity. It doesn’t matter which” – was cutting. Surely people have the right to choose which charity they give to?

When did charities stop being charitable?

In many communities, support for charities is waning as the predominantly older volunteers become ill, bereaved or find it generally difficult to keep going while younger members of the community do not come forward. So many families now rely on two incomes to survive that there is little time, apart from involvement with the school, to give to local charities.

This year our local charity mail was cancelled because of lack of volunteers. So to do my bit, I’ve offered to collect it.  One reason I can do this is that I am not restricted by organisation rules and pro formas.

READ  How to save money when online shopping

The restrictions and protocols surrounding many charities can be offputting. In the New Year I asked to join the local branch of a national charity organisation but was required to attend their meetings. These clashed with another activity but they do not meet in the summer when I am free.

All I need is a form and how to pay by BACS or cheque but no. I am now, in December 2015 still not a member. I have expertise in marketing, public relations, teaching, writing, publishing, computer skills. I would be a valuable member but the door is closed.

The charity organisations’ inflexibility is well known amongst older volunteers. Once I worked in a local charity shop. I pleaded I had amateur dramatic rehearsals on the evening of my afternoon shift. I would have happily done a few hours or even finished at 4pm instead of 5pm but even getting my coat two minutes early brought a sarcastic chide from the manager.

A comment from one paid member of staff suggested the manager did not understand the difference between an employee and a volunteer. I also know charities where volunteers must undertake training, get CRB checks and learn complicated bookkeeping or electronic tills with little support.

While this attitude prevails charities will be unable to recruit and older volunteers take on too much and eventually give up.

What can we do?

Our communities and society in general needs us to continue giving our time and money to worthy causes. I would urge people to select their chosen charities to dedicate to, and not be swayed by the mass of demands. Walking past a charity stall rather sneakily set up at the shop entrance doesn’t make you a bad person.

READ  Can we have a waste-free Christmas?

If you’d like to volunteer, remember you are just that: a volunteer. You’re not a paid member of staff with set hours, and you should never feel bullied into giving or doing more than you can.

And a word to the charities out there. We want to support you. We want to help those less fortunate than us. But you need to make it easier to give what we can afford without expecting more. Open your doors and welcome in those who can volunteer.

Because otherwise, people will start turning their backs on charity. And that’s when we really are in trouble…