It’s a sunny June day, I’m in a queue at the post office, checking emails and planning my errands. 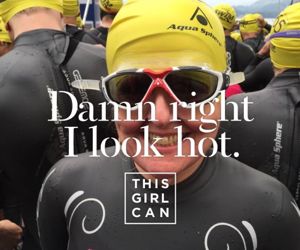 Amongst the M&S offers and a reminder to return my library book, a particular email catches my eye.

As a huge fan of Sport England’s ‘This Girl Can’ campaign, my heart skips a beat as I read:

I’m getting in touch on behalf of Sport England and the ‘This Girl Can’ campaign. We’ve seen the great picture you’ve uploaded using the This Girl Can app and wanted to get in touch to see if you would be interested in working with us on a potential media opportunity, to help support the campaign in your local area…’

I was thrilled and honoured that Sport England might want to use my photo and story to promote women’s sport in the UK, and couldn’t wait to find out more.

What is This Girl Can and why was I so excited?

For those of you unfamiliar with the This Girl Can campaign, let me explain. As we know, the vital role exercise plays in our overall health is emphasised time and again in magazines, news reports and government initiatives.

But despite the fact we all know keeping fit is important, the statistics show that two million fewer girls and women participate in sport on a regular basis each week than boys and men.

In the league tables of 27 European countries, England is 3rd for boys’ participation and 19th for girls.

Nevertheless, 75% of all women interviewed said they wanted to do more sport. 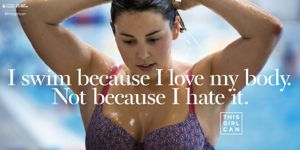 Sport England wanted to understand the reasons behind the statistics and bridge the gap between women wanting to do sport and actually doing it. Simply telling women to ‘Just Do It’ isn’t enough.

The findings, based on existing research and interviews with women of all ages, sizes and abilities, were very revealing.

The universal fear of judgement

Essentially it came down to one unifying theme. The fear that many of us – myself included – have of being judged on our:

If you’re like me, you’ll be nodding along in agreement here.

All these points exactly represented how I had felt about exercise for so many years, through my anxious teens and definitely once I became a mum.

It was only when I couldn’t sleep and a friend recommended I try the indoor rowing machine, that I plucked up courage to go to the gym.

And do you know what? It wasn’t as scary as I thought it would be.  In fact, everyone was really welcoming and supportive.

Get ur freak on!

And so the This Girl Can campaign was launched with a punchy, vibrant advert.

Real girls and women of all shapes and sizes were shown playing football, swimming, running, cycling, playing netball, boxing, rowing and doing Zumba, all set to Missy Elliott’s Get Ur Freak On!

READ  Walking therapy: the power of the outdoors

With catchy phrases like I Jiggle Therefore I Am, I Kick Balls, Deal With It and Damn Right I Look Hot, the ad shows normal women laughing, getting sweaty and having fun.

It has been viewed nine million times on You Tube alone, not to mention the national TV coverage.

If you’re on Twitter or Facebook you will have seen #thisgirlcan tweeted not just in the UK but worldwide.

The response has been phenomenal.

It’s like a lid has been lifted on our worries and a collective sigh of relief that it’s okay not to look perfect and still go and enjoy sport, whatever our age, size or ability.

Huge goggles and being a poster girl 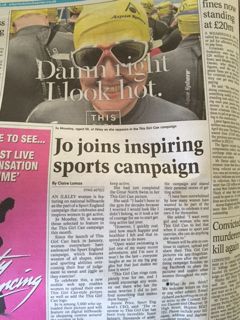 This is why, when I received the invitation to play a small role in the This Girl Can campaign as one of the poster girls for Yorkshire I was so excited!

I had previously uploaded a photo to their app after my first open water swim on Lake Windermere, wearing huge goggles, a bright yellow swim cap and a very big smile.

The caption I had deliberately chosen with it being ‘Damn Right I Look Hot!’. It was my way of confidently showing that I’d had fun and was proud of the swim, despite the fit of giggles my family had seeing the photo.

The picture had captured their attention and was used in press releases regionally and on a revolving digital billboard in huge shopping centres across the UK.

I was interviewed on the radio several times and my Twitter account was hugely supportive. A couple of people even said it had inspired them to go to the gym and have fun, which was the most touching outcome.

READ  How to keep up motivation for your workout routine...

What has ‘This Girl Can’ taught me?

That we all feel the same. We’re all worried that we don’t measure up to the perfect images we see in the media or on Facebook or Instagram. We are not alone.

We don’t need to look like the image of that perfect size zero to have a go at Zumba, to go for a run or get on a bike. Because most of us don’t, most of us wobble a bit, sweat and go red when we exercise and very few of us look glamorous in Lycra or a wetsuit. And that is just fine and it absolutely doesn’t matter.

Despite years of believing I wasn’t the sporty type – growing up in the 70s if you didn’t like hockey or netball, you just assumed you weren’t – I realised that maybe there is a sport I can enjoy and feel good doing, perhaps even be good at. Yes, and that applies to you too!

Actually finding the right sport is great fun and brings other opportunities to make new friends or learn different skills that will help us be more confident in other areas of life. And that above all, we’re worth investing the time to do so.

From ‘Just Do It’ to ‘We’re Worth It’ and ‘Yes We Can’ – that’s why I love This Girl Can. It was an honour to play a small but very happy part in such a huge campaign that inspires women to be self confident, healthy and enjoy themselves.

Anyone fancy joining me for a swim? Yes? Get your cossie and  goggles… let’s go!