As Brexit rumbles on with the UK preparing for its official ‘divorce’ from the EU, it seems the 2016 referendum result could be impacting on more personal relationships, too. 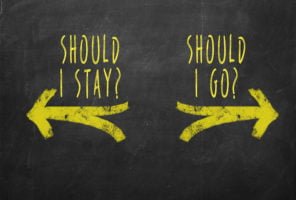 After all, if one partner voted leave and the other voted stay, the resulting ongoing debate which has been unleashed is hardly the grounds for a peaceful partnership.

While it’s unlikely that the vote would have seriously impacted a stable marriage, those already in volatile waters could have found themselves hitting the rocks. In fact, one savvy Dutch entrepreneur has even set up a ‘Brexit Hotel‘ for couples on the brink of divorce. It’s a similar story in the US, with polarised politics causing friction between couples from the Trump and Clinton camps respectively.

Was the referendum the last straw for your marriage? Or has something else come along to disrupt an already-delicate balance? When your marriage reaches crisis point, the question many people ask is: should I stay or should I go?

The divorce rate is actually declining. This is partially due to more people choosing to live together rather than get married. However, the number of divorces is still dropping. Good news, maybe. But if you genuinely feel that your marriage can’t go on, sometimes it is the right answer.

Unfortunately, citing differences over Brexit won’t get you very far in the divorce courts. Currently, the UK just has one ground for divorce, which is ‘irretrievable breakdown’.

In turn, this is divided into three areas:

You can’t use this reason if you’ve lived together as a couple for over six months after the infidelity. Currently this also can’t be used by same-sex couples.

See also  Surrogacy and parental orders: what you need to know

If you feel your spouse has acted in a way which makes it untenable to continue your marriage.

In England and Wales you must have been separated for two years if you both agree to the divorce, or five years if one of you does not consent.

You can also cite desertion if you have been abandoned without consent for more than two years.

Adultery and unreasonable behaviour are seen as ‘fault-based’ divorce, as this is attributing blame. This can sometimes fuel the flames of an already heated situation. It’s important for couples to remember they must still sort out their financial situation. For those with children, they will still need some contact after the divorce.

This can sometimes add unnecessary acrimony. Couples are also forced to wait to sort out finances, property and arrangements for their children. In some – thankfully rare – cases, one partner can be ‘locked in‘ to a marriage they are desperate to leave, if their spouse won’t agree to a divorce.

Politics or otherwise, whatever your reasons for seeking a divorce, it’s important to take legal advice from a solicitor before starting your proceedings.