well written, engaging, and so much fun to read that the pages almost turn themselves. More than that, Wonder touches the heart in the most life-affirming, unexpected ways, delivering in August Pullman a character whom readers will remember forever. Do yourself a favour and read this book – your life will be better for it.

It does all that and more. As a mother of teenagers I was spellbound and absorbed by how R J Palacio manages to encapsulate the politics, terror, compassion, cruelty, self-doubt, confidence, muddle, language, humour, fluidity, inconsistencies, open-mindedness, certainties and general chaos and wobbliness of being a senior school-aged ‘western’ human being.

Questions, dilemmas: Where to sit in the dining hall? Who to ally yourself with? What to wear, read, say?

The book is divided into short chapters, each written in the first person by a few of the key teenage characters. None of the adult characters get given a chapter though so, as an adult reader, you inhabit a different – and possibly forgotten – world every time you open the book. Cool!

August, around whom the book is based, is a hero. He doesn’t intend to be but he is faced with, and deals with, prejudice every day. He was born with a grossly deformed face (mandiculofacial dysostosis) caused by an autosomal recessive genetic mutation. 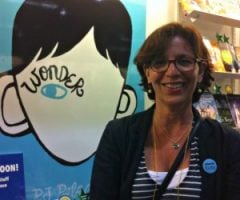 He is, in a quiet way, clever, interesting, kind and funny and so are his family and some of his teachers, and the book is as much about how we would like and ought to behave (and how we absolutely shouldn’t behave) than almost anything else.

The characters both within and without his family are so real; we all know all the people in the book and one of the most refreshing aspects of the story is that it illustrates how humans can and do redeem themselves if you just stick with them and have a little faith. It is also a kind book; there is almost nothing judgemental about it.

I finished the book on a Sunday morning – couldn’t get up before putting the book to bed – and the last four chapters made me sob, with tears and snot, at what humans are capable of. I haven’t spoilt the end for you; you don’t know whether the tears were of joy or despair. Please read it – and get your teenagers to read it too.

Wonder by R J Palacio is published by Random House

‘I had warned Mom about August’s face. I had described what he looked like. I did this because I know she’s not always so good at faking her feelings, and August was coming over for the first time today. I even sent her a text at work to remind her about it. But I could tell from the expression on her face when she came home after work that I hadn’t prepared her enough. She was shocked when she came through the door and saw his face for the first time.

‘Hi Mom, this is Auggie. Can he stay for dinner?’ I asked quickly.

It took a second for my question to even register.

While Auggie called his mother on his cell phone, I whispered to Mom: ‘Stop making that weirded-out face!’ She had that look like when she’s watching the news and some horrific event has happened. She nodded quickly, like she hadn’t realised she was making a face, and was really nice and normal to Auggie afterward.

After a while, Auggie and I got tired of working on our projects and went to hang out in the living room. Auggie was looking at the pictures on the mantel, and he saw a picture of me and Daddy.

‘I didn’t know you were…what’s the word?’