Home / Happiness / Spiritual / Astrology / Astrology: which signs apply to you?

One of the mistakes people new to astrology often make is assuming that if they read about activity in a zodiac sign other than their birth sign (or ‘Sun’ sign – the sign the Sun was in on their birthday), then it can’t apply to them in any way. 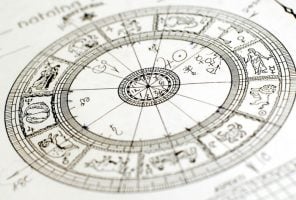 That just isn’t the case. The thing is that we all, in our birth charts, have the entire 12 zodiac signs present. It is the precise extent to which they are emphasised in the chart that is significant.

So we can say that, potentially, we are made up of a little bit of all the signs in our characters, but the specific balance will be clarified by which and how many planets are located in those zodiac signs.

Bearing in mind that we recognise ten celestial bodies as the major components in a birth chart (i.e. Mercury, Venus, Mars, Jupiter, Saturn, Uranus, Neptune and Pluto, along with the Sun and Moon), there is the potential for at least ten signs to be quite strongly emphasised.

However, usually there will be a smaller amount that seem relevant to us in a very personal way.

Added to the planets, we also talk about the Rising or Ascendant zodiac sign in a birth chart – along with the one at the top – the Zenith or Midheaven – which is often called the MC, an abbreviation of the Latin name for the Midheaven, which literally means the middle of the heavens. It is actually the high point in the sky – and it equates to a time position of midday, noon, 12pm.

So, think about how the Sun looks when it is midday – it’s the point when it has the potential to shine the brightest and give the greatest warmth. We often notice the Sun and comment on it when it’s at this point, perhaps reaching for the sun lotion, because we can’t ignore that heat.

See also  The Lights of the Sun and Moon

It’s linked with the idea of our greatest achievement, or what we hold dear – the thing we’ll take to our grave and be glad we managed to do. This may be a career achievement, but it could just as easily involve bringing up a family, or sitting on a committee for something we believe in, or a whole host of other things. It’s whatever is viewed as important, something we’re proud of and that we’re usually recognised or known for, too, because it’s linked in with reputation.

The Ascendant, on the other hand, is a lot to do with our early engagement with the world and how we see it. It’s sometimes described as being like a lens through which we view the world and other people.

People may also pick up on our Ascendant energy and ‘see’ that, rather than noticing our Sun sign qualities. This is true of both the Ascendant and the MC – they are a bit like a framework that we wear as a costume and so people who don’t know us well ‘get’ those first. Occasionally, though, someone has a very strong Sun sign presence – or a particular planetary quality shows through, because it’s a rising planet, for example and we pick up on that. There are always exceptions.

Given that there is so much potential ‘noise’ in the chart – it’s often quite crowded in there – it’s perhaps no wonder that people don’t always readily relate to whatever is said about their Sun sign.  That doesn’t mean that Sun sign columns or information about the Sun is rubbish, though. There is a theory that says that this is the most important part of the chart, because it shows what we are trying to become. It may not start out as our strongest identity, but it might be what we’re meant to understand and develop.

See also  Letting your star shine for events and celebrations

Birth signs and opposites (The Sun and its shadow)

All the zodiac signs exist on a polar axis with their opposite signs. If you imagine a round clock but, instead of the usual two uneven hands, you have 12 equal hands, each on the numbers one to 12 – that’s roughly what the framework of a birth chart diagram looks like.

There will be one zodiac sign at each position of the ‘hands’ and another exactly opposite, which may be all different, or feature a few repeats.

Sometimes, despite a person’s Sun sign, they live out of the opposite sign. They’re trying to be the Sun sign but they live in its shadow, because it’s harder to keep occupying the spotlight.

There probably does need to be a balance – can you imagine if the sun was out all day long?  It would be too much. We’d possibly never properly rest, due to too much light, or we would get sapped by the heat and have too much vitamin D and feel unwell.

We all need down time, recovery periods and a chance to hibernate a bit and think things through. For example, if you are an Aquarius Sun person, you are often out busy trying to do the best thing for all concerned and will help many people who cross your path – certainly on a good day! You probably believe in good causes and thrive in groups.

But the opposite sign, Leo, the place of your Sun’s shadow, needs ‘me’ time, too. If individual concerns are being swamped by group interests, your Leo shadow can get a bit twitchy. Even if your Aquarius Sun doesn’t seem to care what other people think, your Leo shadow has a certain pride factor that matters.

See also  Letting your star shine for events and celebrations

It may all depend on what circumstances you are facing at any given moment as to which qualities shine through the most. Sometimes they will work in unison: one supporting the other being the ideal scenario.