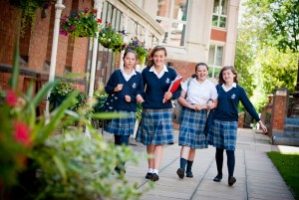 The single sex vs. co-ed debate is, in my opinion, a bit of a clichéd and out dated one. It is not as straight forward as arguing for or against. For me it has to be about personal choice, and who can offer your child a tailored education which will actively enable them to achieve the very best for themselves in any and every field of endeavour possible.

Girls at Malvern St James excel as much in physics and maths as they do in English, drama or art, and they are free to pursue and achieve in a huge variety of sport and extra-curricular enrichment activities.

For example, we have a girl at MSJ who is involved in show jumping on a national level. We have worked with her family to reduce the timetable to allow for her outside commitments without compromising her education. Our unique creative approach has also enabled some of our brightest girls, who are competing on a national level in eventing and lacrosse, to succeed at Oxbridge level and further afield. This includes a girl entering an American University on a sports scholarship.

Equally there are no social disadvantages to a good, single sex education. Girls at Malvern St James for example are not insulated or segregated from boys or male influence in their school life – they are after all surrounded by a co-ed life outside the school gates. Academically there can even be advantages.

It is true to say that in a single sex environment girls are more likely to take up subjects normally dominated by boys, like maths and sciences.

Research done by the Institute of Physics has shown that girls were almost two and a half times more likely to go on to do A-level physics if they came from a girls’ school rather than a co-ed school (for all types of maintained schools in England).

At Malvern St James we are passionate about encouraging pupils to actively engage in science, engineering and technology (SET) subjects. As a result and we have wealth of budding, bright young scientists and engineers in the school with an impressive 66.4% take-up in girls doing at least one science or maths subject.

Indeed, rather than going out of fashion, parents are continuing to positively choose single-sex education. The figures published on the Good Schools Guide website last year showed that girls schools have managed to maintain their position, reducing by only 1% in the last six years.

Parents are still looking for the style of education we offer their daughters, and MSJ that is in even greater numbers. For example the intake of Year 9 pupils to MSJ has doubled in the last two years, in fact we have seen the popularity of 13+ and 14+ entry match that of the traditionally more popular entry years of 11+ and 16+.

In addition we have seen healthy growth in the number of pupils boarding, bucking the national trend seen in the ISC Census report earlier this year. Steadily increasing since 2009, the number of girls boarding at MSJ has swelled by 10% despite the national decrease of 0.2% and a decline of 0.6% for girls’ schools in particular. We believe this is because of the flexibility of our boarding offering which can be tailored to each family’s needs.

The positive, flexible education we offer embraces the whole child’s need. Educating your daughter in a single sex environment is liberating, rather than limiting, within an environment which is gender-open rather than biased. Our approach is welcomed by our girls and parents, and recommended to others.

I believe girls leave MSJ better equipped to put themselves forward for the risks and challenges of a fast-changing, culturally and socially diverse world; not least choosing to be both career women and mothers, and having to manage roles to an extent that few men must do.