Julie Bailey CBE is determined that we never forget what happened to her mother in Stafford Hospital.

Part One of a series about the work of Julie Bailey, CBE. 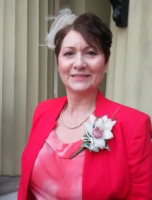 Julie Bailey is a quietly spoken, gentle woman who has been campaigning since late 2007 for patient safety in the NHS. She is No 2 on the Woman’s Hour Power List of Game Changers for 2014. In January 2014 she was awarded a CBE for her ‘services to the elderly’. In fact this description of her work underestimates the impact she has had: she could have been recognised for her ‘services to everyone who ever needs the NHS, no matter what age.’

Julie was catapulted into her campaigning work after her mother Bella died in Stafford hospital in November 2007. Her mother was only 57 and had been admitted for a minor procedure. She died after a series of mistakes had weakened her and because on her final day she wasn’t given the drug she needed to cope with the blood transfusion she had just received.

All true, except for one detail. Julie’s mother Bella wasn’t 57. She was 87. And sadly, for many people, this story suddenly loses its impact. An 87 year old woman dies in an NHS ward. For many of us, it’s barely news any more. It’s what happens at that age, isn’t it?

As I listen to Julie telling the story of her mother’s last day, I realise how I have been guilty of not engaging fully with this story, which has been in and out of the media for years. I ask myself why not? And I assume, shamefully, it’s partly the age of the patient and also my assumption that the hospital would, of course, have done everything possible to save Bella.

To understand Julie, and her campaign since, it is important to realise what actually happened to Bella Bailey on that day. 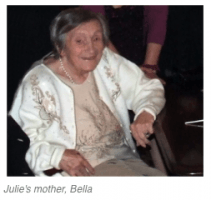 Hearing the story told first hand by the daughter who watched her frightened mother’s final hours is an emotional experience, even seven years on. Julie’s recall of the events is clear and draws you into the ward where it happened. It is suddenly easy to imagine the scene, easy to imagine your own mother in the bed. After the blood transfusion, Bella’s lungs rapidly filled with fluid and though she was gasping for air for a number of hours like a drowning woman, Julie could not persuade the staff present to administer the drug she needed. Bella died several agonizing hours later in front of a helpless and distraught Julie.

To understand why Julie has devoted her life since her mother’s death to campaigning for improved patient safety and accountability in the NHS, you simply have to realise that Bella Bailey needn’t have died on that day or in such awful circumstances. There was a colossal and collective failure of care, and it is difficult not to conclude that Bella’s age was a material factor.

I feel slightly sick listening to the unfolding of a completely avoidable tragedy. Here was a vulnerable woman being put through acute pain, suffering and fear, who in the end lost her life. Listening to the story, Bella is no longer a statistic, or an elderly lady, but a human being with as much right to live as any of us. All the stories I’ve heard of the abuse of the elderly in care homes come flooding back to me.

I feel appalled and humbled in equal measure as I listen to Julie, and relieved that people like her exist to create good things from bad.