Home / Time off / Culture / Books / An age of literary innocence: a lesson for life

You may have been one of those who blossomed alarmingly overnight but there were others – myself included – who loitered for too long in the hormone relegation zone. 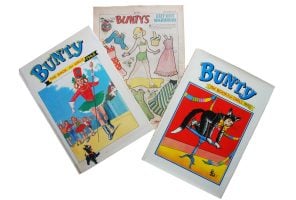 Perhaps it was because of this, combined with being the youngest child of older parents, that I remained influenced by forces decidedly quaint and unfashionable compared to what was ‘trendy’ in my teen years.

You need look no further than my go-to reading matter, dominated by girls’ popular fiction published anything up to ten years before my birth.

It’s no surprise then, for someone at the mercy of her imagination, that these harmless mid-century fables became a working theme later in life.

The writer Jane Shaw’s quaintly accident-prone but enterprising Susan – the central character of 11 books published between 1952 and 1969 – returned into sharp personal focus when the recession bowled me over in 2008, decimating all that was safe and familiar. 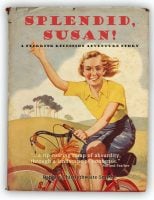 The Susan books by Jane Shaw from Amazon

A couple of years later, climbing back out of the worst of that deep and dark pit, I began to write about my surreal experiences of business downfall, repossession and homelessness.

Curious though it seems, it was second nature to record the unravelling decline-and-fall tale through the bizarre events encountered by an incredulous central character. I chose to call her Susan.

I can’t properly excuse my choice of writing in this style, except to say that it made a kind of therapeutic sense to record the extraordinary nature of the times by presenting them satirically.

READ  Insects: why they're so great for our gardens

Opting to parody the trauma by mimicking those books also gave me free rein to mischievously mock my enemy: The System. After all, this malevolently elusive entity gifted me with a rich host of absurd characters and improbable dialogues for which I was most grateful.

I always loved those unfeasible bear-fighting mid-2oth century storybooks. You know the type – a plucky schoolgirl heroine always wins her perilous battles. My unpublished bestseller had the working title of ‘Splendid, Susan!’ – a romping spoof of a girls’ own adventure tale.

I suppose there is one explanation for the lasting attraction of that sort of story: there is always a happy ending. No matter how many bears you have to fight.

So what is the enduring charm of those girls from popular fiction that can still resonate in adulthood? One theory may well be that hopeful inevitability of an agreeable outcome. But even though we know from experience that happy endings don’t last, I would like to propose that we try to make a little space in our lives for the endearing charm of these unsophisticated role models.

Around the same time as I was resisting maturity, if you ever needed a regular quick-fix shot of game girls, you could always pick up that week’s issue of the Bunty comic.

The classic girls’ title ran for 43 years from 1958, closing after 2,249 issues, and was packed with things to do and characters to aspire to. 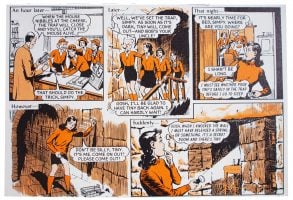 We will probably all recognise a commonly recycled motif in the fiction of that time: the ‘school story.’ Bunty didn’t disappoint. In one of comic publishing’s longest-running regular strips – The Four Marys – the wholesome mystery-solving school friends heroically triumphed in remarkably frequent and daring acts of bravery.

If they weren’t foiling a devious in-house plot concocted by the miserable Mable and Veronica, you could read about the foursome rescuing lost children or thwarting any number of miscreants. Everything was done in the name of preserving the reputation of their school, St Elmo’s. It was truly gripping stuff.

Since working professionally with the Bunty comic, I have enjoyed plenty of opportunities to talk to other women about their memories. Many have recalled their weekly race to the newsagent to see Bunty’s outfits for that week. Some confessed to me that they still had the paper clothes in a shoe box somewhere and shared tips on about how to stop the little tags tearing off. A good few remembered the little drawn characters with astonishing detail.

These favourite stories of the post-war decades focused on girls’ achievements and what used to be called pluck. Yet when Bunty came to an end, its illustrations overtaken by ‘photo-story magazines’, we lost not only the charm of the guileless role-models but, for me as an artist and designer, also the beauty of the illustrations which brought them to life.

Despite its evident popularity Bunty has never posthumously received the same notice as her sister comic Jackie, for example. Is this because industrious innocence is just not sexy? Jackie’s focus was elsewhere – with teen romance, pop-idols and problem pages. We weren’t ready for that yet.

But, like the regular characters in the Bunty comic, you probably knew girls who played sports as well as enjoying reading, making and using their imagination. We hungrily followed our favourite characters, those capable and ambitious young female business-makers, at the same time playing with a character whose fashion wardrobe was changing with the trends on a weekly basis. And what’s not to like about that?

Perhaps fantasy worlds are easier to live in than the real one, or perhaps even as adults we still need to have some make believe in which to explore our dreams and explain our pains.

Either way, I see no harm in celebrating a lost world of intrepid stories for girls and facing life’s challenges as an adventure heroine. So bring on the bears.

The Susan books by Jane Shaw from Amazon