Home / Happiness / Achieving goals: I did and you can too

Achieving your goals is possible, no matter what background you’re born into. It takes the right level of commitment, motivation and the right mindset. But you can do it. 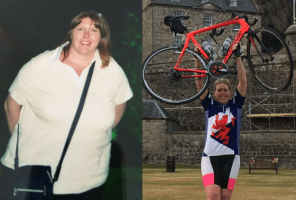 How do I know? Well, I’m living proof.

As a child I was brought up believing we were born big and tall and that’s how we were meant to stay. My mother was wonderful but traditional, thinking that children should be ‘filled up’. As a family we were big eaters.

When I turned 22 I realised my weight was an issue. I’d been invited to a prestigious event and wanted to get dressed up. But the clothing choices at 21 stone and size 24 were limited. It was time for decisive action, so I joined my local slimming club. Scary at first – the prospect of being weighed in front of others was daunting.

But in just over 17 months I lost seven stone, through sheer determination and self belief.

A new focus on my health

Achieving my goals in terms of health became even more important to me when my mother had her first heart attack at a young 46. This spurred me on more to begin a healthier new journey as a new me. Losing weight helped to grow my confidence. I felt my life had been transformed.

My future was looking rosy. I was travelling the world with work, met my now-husband and we got engaged. Then life took an unexpected and dramatic turn.

My dad, who I was very close to, went to hospital for a routine check-up before being rushed into theatre because he was critically ill. They gave him a 20 percent chance of survival just two weeks before my wedding day. I stayed positive for the family and for a short time, my dad seemed to be pulling through. I was very focused on my wedding but visited him regularly in hospital and supported my family.

On our wedding day,  I visited my dad in hospital, in my wedding dress, hoping he’d be well enough to see me but he was so poorly. We decided not to go on a honeymoon and shortly after the wedding, my dad died after a tough fight.

At first, his death didn’t sink in and still, I stayed positive but as the focus of getting married wasn’t there to keep me on track anymore, I was largely unaware that old habits of poor diet and little exercise were returning as the grieving process caught up with me.

The return of old habits

His death had caused me to take the brakes off and in 2003, I’d put on five stone in just two years. Almost right back where I started. At that point, I knew I had to get back on track. The thought of my dad wanting me to be happy got me focused again on my goals.

At age 55 my mum had a triple heart bypass. I knew I had to lose the weight and be the better, healthier me again. I became actively involved in fundraising supporting numerous Charites, British Heart Foundation, Bluebell Wood and mainly the Weston Park Cancer Charity, which is an amazing charity in a year will treat in the region of 75,000 patients diagnosed with cancer, based in my home city of Sheffield. I have been a fundraiser since 1994.

Before long, I was cycling about 5-10 miles a day on my new bike and then I decided my first real challenge was to cycle the 17 miles around Derwent Reservoir for the Weston Park Cancer Charity & Endeavour, both based in my home city of Sheffield.

It was a bit of a joke at work that I couldn’t do it but I persevered and went through the pain to achieved it. I suffered afterwards for a short while but it was a challenge worth taking and I was so proud of myself.

This set the ball rolling for many more years of fundraising as I found it helped me focus on my goals. I could break them down into smaller steps so I always felt I was achieving something. I never lost sight of my bigger goal. And I was always clear why I was doing it and what motivated me to keep focused.

Sport was a big motivator for me and I worked with a personal trainer and got involved in kickboxing. I continued to support numerous charities via my cycling challenges.

Recognition for my achievements

Deborah receiving her award – Coaching For A Cause in 2017

It wasn’t long before I was recognised for my community work by Bradfield Parish Council and The Lord Mayor of Sheffield. I was also nominated for the Community Fundraiser Award with Elastic FM, a very proud moment to become the winner.

When the hospital charity set up their first-ever cycling challenge, The BigPedal, I helped to promote the event and borrowed a road bike from a good friend to enable me to take part.

It was a 36-mile cycle challenge around Sheffield. A mixture of different people took part, including fundraisers and patients.

One man who I met at the starting point had been treated by the hospital for terminal prostate cancer. Unfortunately he knew he was going to die in time and he really inspired me to complete the challenge. I remember it was 16 June 2014 just before we set off his daughter phoned him to wish him happy father’s day. In that moment I knew that whilst the challenge ahead was going to tough it was only a short term pain to gain pleasure. The patients and families living with cancer are going through far more challenging times every day.

Taking to the road

My next challenge came soon. The Tour de France came through the village of Bradfield for the Steel City Stage 4. I was so inspired by it that I knew I wanted a road bike to get properly into cycling. I joined a cycling group with some work colleagues, called “The Geeks on Peaks.” As part of the group, we regularly raise money for a local charity Endeavour- work hands on with some of England’s most disadvantaged and sometimes forgotten young adults.

In 2015, the Geeks on Peaks team cycled London to Paris, 260 miles in three days. I committed myself to training in all weathers and with grit and determination, I could ride 100 miles a day, sometimes eight hours a day. But it was hard going. Since then I have cycled London to Paris, Holyhead to Cardiff, County Mayo to Dublin and just a few weeks ago Inverness to Dumbarton.

At that time, I was doing well at work and people were telling me how caring and inspirational I was managing a team and engaging people, as well as doing a lot for charity. I was asked if I’d thought about helping others achieve their goals. I’d always known how to visualise my goals, get myself fit and achieve what I wanted in life. At that point, I hadn’t thought about what I could offer others.

After committing myself to studying, I qualified as a personal performance coach with the Coaching Academy in 2015 and set up my own coaching business.

Now, while being passionate about coaching others, I enjoy public speaking and I am a regular guest on BBC Radio Sheffield. It’s live and at first felt nervous but it’s great to be pushed out of my comfort zone. I’d recommend it to anyone. Now, it’s more like I’m just having a conversation with a friend.

What I’ve learnt along the way

It’s been quite a journey and here are my life learnings:

The next stage of the journey

I’m now focusing on working with coaching clients who are ready to embrace the next stage of their life, whether it’s picking up old interests or finding new ones to re-light passion again.

Finding purpose is so important as we get older. I’m continuing to fundraise and I am currently working on a number of exciting projects along with guest speaking.

At the age of 50, I hope I’m showing people how a second life should be lived. No matter what your circumstances, if you have the right mindset, you can achieve almost anything.