Home / Time off / Travel / A move across the Channel: France it is!

Many of us travel abroad but not all of us are brave enough to live there! Read about starting a life in Northern France 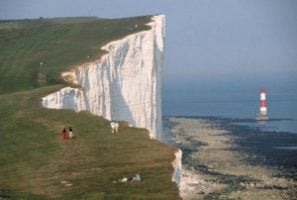 In 2002 I decided it was time to go back to work after spending seven years as a full-time mum to our son, James. I had been involved in volunteer work but, once James started school, it was time to find a proper job. It was a daunting task; I was in my mid-forties and hadn’t worked for so long that I thought I might be on the scrap-heap. However, to my surprise, I was offered the first job I interviewed for and, in September, started my first paid job since James was born.

By the end of October we had decided to move to France!

The decision came out of the blue – with hindsight, it was probably not the most sensible thing to do. My husband, Graham, was a truck driver. His week was a constant battle between impossible delivery schedules and never-ending traffic jams; it was anyone’s guess which one would win on any given day but one thing was for sure – it wasn’t usually him! Consequently the job he had always loved had become so stressful that he was starting to hate it.

“For two pins, I’d move out of this country.” It was a throwaway comment at the end of another bad day but he was amazed when I said: “OK, let’s do it!”

By sheer coincidence, I had seen a feature on television that morning about a family who had moved to Brittany. They had two children about the same age as our son and were leading what seemed to be an idyllic life; property was cheap, the children had the sort of freedom we had had growing up in the sixties, and people were nice to each other…

But was it really an option for us?

We had lived in a small cottage in a lovely village just outside Oxford for 11 years. We had a great social life within the village, James was settled at the village primary school and had just joined the cubs. I had found a job. But, Graham was often working away all week and when he got home he was too tired to enjoy his family. Our son was growing and our cottage was correspondingly shrinking! It was perfect for a couple with no children, but there was not enough room for a growing boy.

Sooner or later we would need to move and it would probably have to be away from the village; it was in a conservation area and properties rarely came up for sale. Our families were scattered all over the UK so we would probably see them no less if we moved to France.

The clincher came when we started looking at properties on the web. The houses within our price-range were amazing – in fact, they weren’t houses, they were chateaux, manor houses with fishing lakes, converted monasteries…well, you get the idea!

After a couple of weeks of deciding that we were going to live in a chateau with our own private lake, we came down to earth and started thinking sensibly. Where did we want to live? France is a huge country and it has everything – snow and mountains, sun and beaches, dramatic gorges and pretty hill villages.

Graham also had to consider employment. We were not in a position to stop work completely, even though we could sell our cottage, clear the mortgage and still put a considerable amount in the bank. As a truck driver, he could probably find work fairly easily, but he knew that if the worst came to the worst, he would be able to commute between France and the UK and work as an agency driver, providing we weren’t too far from a port or airport.

See also  A move across the Channel: Sold!

We eventually decided that Brittany or Normandy was a good option, with a climate similar to the south west of England (none of us particularly enjoy excessive heat) and plenty of transport available in terms of ferries and airports.

We continued looking at properties online, this time with more sensible aims; we wanted something in the country with land and either three bedrooms, or two bedrooms with room to extend. Many people were buying a property for peanuts and renovating, but that would have meant living in a building site for months, perhaps in a caravan, and we didn’t feel it was fair to our son; I wasn’t that keen on the idea myself!

We had broached the subject of moving with James and, at first, he was less than impressed – he loved school and had made lots of friends. Of course, his education was something we had to take into account. We felt that the chance to live in a new country and be part of a good education system, coupled with learning to speak another language, could only be of benefit.

In the end we had to bite the bullet and actively do something – you can only look at properties online for so long. We found an English estate agent based in Brittany and arranged to visit during the October half-term to look at some properties. The result of that trip changed our lives.