Home / Time off / Travel / A move across the Channel: A dream house in France

Many of us travel abroad but not all of us are brave enough to live there! Read about starting a life in Northern France 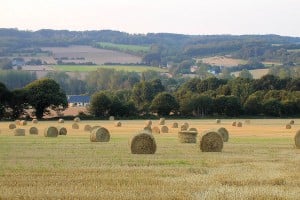 Until we arranged our first visit to look at property, we hadn’t told anyone of our plans, so it was with some trepidation that we finally told the family. I am an only child, so our son is the only grandchild, but my parents were totally supportive; they did everything they could to help, and came up to Oxford to look after our animals while we were in France. I’m sure they must have had misgivings, but they never once voiced them, and took a great interest in everything happening.

We stressed to both them and the estate agent that we had no intention of buying a house at this stage – we were really going over to explore the area and let James see where we could be living. We met up with the agent, Sarah, in France at the end of the trip and she showed us five empty properties, each in need of varying degrees of decoration and/or renovation.

One was an old convent which would have been a real challenge even for a TV home makeover show; another did actually have its own small lake! The fourth one we saw was an old longère, a traditional stone-built, single-floored Breton farmhouse with an attic upstairs (originally used to store grain). By the time we got to this one, Sarah had sussed what we were looking for. We drove down a lane and through what seemed to be a farmyard, and pulled up outside some closed white gates. We couldn’t see beyond them because they were too high but I can still remember to this day that she said: “I think you’re going to like this.”

She opened the gates and we drove in. All three of us had the same reaction: WOW! We were in a large gravel courtyard with an ivy-clad longère in front of us and various outbuildings scattered around, all standing in about an acre of land. The garden seemed huge – a massive lawn with lots of mature shrubs and trees. In fact it was more like a park. We fell in love with it straight away, before we even got inside.

The house had been owned by the same family for generations but had become too big for the current owners in their advancing years. They had moved to a smaller home in the neighbouring village and it had recently been used only as holiday accommodation for family members when they came to stay. Consequently it had been modernised to some extent and was ready to move into, although it needed a little TLC.

There were only two bedrooms, but the attic stretched the length of the house and was ready to be converted; the lounge was huge with a massive inset fireplace (visions of cosy log fires in the winter!) and there was a decent sized kitchen which would need a complete upgrade. Even the bathroom was fully operational so there would be no need to resort to a tin bath and the nearest bush! It was everything we wanted, and once we explored the massive garden and outhouses we were hooked.

James loved the space in the garden, and was already overdosing on ideas of tree-houses and secret dens. One of the children from the farm next door was hanging around at the gate so it was evident there would be other children for company. It really did seem to be perfect.

We said our goodbyes to Sarah and, although we didn’t say anything to her at that point, or even to each other, we both knew that we had seen the house we wanted.

As soon as we got in the car the discussion started. Could we afford it? Was it the right time to put in an offer and try and sell our own house? We had had no intention of buying at this point – our own property needed decorating before we put it on the market and we hadn’t even had it properly valued. We had planned to do all this over the winter and then look in earnest for a property to buy in the spring, once everything had been set in motion at home.

On the other hand, if we waited, we might lose this house; we knew of people who had been looking for the right property for years and this one had fallen into our laps on the first visit. I’m a great believer in fate; the decision on every other house we had bought in the past had been based on “gut feeling” and we had never been wrong.

We had arranged to stay overnight in Normandy as we had promised James a visit to Mont St Michel. By the time we got there (a trip of only an hour and a half ) we had decided we were going to put in an offer on the house.