Home / Health / Eating (Diets or not) / A gluten-free Christmas

Bloating, discomfort, tummy pains – while many of us experience this occasionally after eating, if you regularly experience these symptoms it could be the sign of something else. 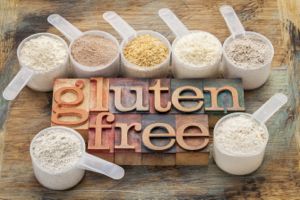 For many people it has become apparent that grains, wheat, barley and rye are just not good for them. This is down to a protein they contain called gluten. They taste great. They make amazing breads, cakes, beers and puddings but at the end of the day that feeling of inflamed discomfort can really ruin a pleasant meal.

And if you have a gluten-free guest staying this Christmas, creating an exciting holiday menu can suddenly become a minefield. Don’t panic though. There are more options around than you might think.

How serious is the condition?

There are various levels of severity when it comes to gluten intolerance.

Coeliac disease is where a severe reaction to the gluten proteins results in the surface of the digestive tract being worn away. This reduces the surface area of the gut and results in severe malnutrition.

Early symptoms can be a general sense of being unwell, bad skin, itching and large and recurring mouth ulcers. Later symptoms can include severe weight loss, chronic diarrhoea, severe skin complaints such as dermatitis and eczema and a whole range of other symptoms caused by depletion of essential vitamins and minerals. Ultimately if untreated a coeliac will starve to death as they can’t digest food though, thankfully, this is very unlikely due to modern diagnosis methods.

A completely gluten-free diet reverses the condition but coeliacs can experience a variety of symptoms when unwittingly exposed to gluten. This can range from almost immediate projectile vomiting to severe allergic reactions including nettle rash, facial swelling and trouble breathing, as well as itching, arthritis-like joint pain and inflammation.

Non coeliac gluten sensitivity is now recognised by doctors and is an accepted medical diagnosis. It brings with it a variety of symptoms. Some people suffer from the most severe eczema. Others experience terrible acne, which continues unabated until gluten is removed from the diet. The most common form of gluten-related acne is cystic acne where large painful lumps form in the skin, causing discomfort and damage to the epidermis. Others suffer from IBS, bloating, constipation, diarrhoea and flatulence. The list can go on…

Could you be gluten intolerant?

If any of these symptoms sound familiar, then removing wheat, barley, rye and all other forms of gluten from your diet could be the answer. However, if you seriously think you or someone you know might be suffering from coeliac disease don’t exclude gluten until tests have been performed. Once gluten is out of your system and the inflammatory reaction has stopped the current testing methods won’t identify the illness. 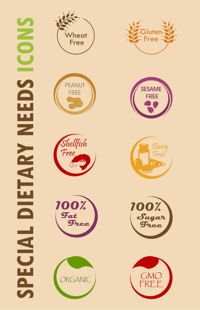 So, what to do when a guest announces they need a gluten-free diet. In the famous words of Douglas Adams in The Hitch Hikers Guide to the Galaxy “Don’t panic.”

Pop along to the free-from aisle in any supermarket and you’ll find gluten-free versions of many family favourites including seasonal goodies like mince pies and Christmas pudding. This will be massively helpful to your guest. As every coeliac knows, trying to work out if an ordinary product might be gluten free can suck the life force from the galaxy.

If you’re only catering for a few days your gluten-free guest will cry tears of gratitude that you even considered their needs. Most coeliacs and gluten-free warriors carry a stash of crackers and that bread you can stick in the oven to make it slightly less rubbery, but it is so nice not to have to resort to the emergency rations.

Fresh fruit and vegetables, potatoes and rice are all free from gluten. Cooking fresh food is a simple way of being sure your recipe is gluten free. Gluten-free pasta is available from the free-from aisle and is cooked in the same way as ordinary pasty. Just make sure you stir it really well while cooking and put a dollop of oil in the cooking water.

If you need flour Doves Farm and some of the supermarkets do a very good range of gluten-free mixes. The self-raising flour substitutes well in most cake recipes (just add more liquid than normal). The plain flour works well in other situations. Generally speaking, if you’re working gluten free for the first time, don’t try anything too fancy. Any coeliac will tell you it can take years to perfect a gluten free Yorkshire pud.

If you make your own Christmas pudding remember that packet suet is coated in flour to make it flow. Either ask your butcher for beef suet and grate it or go online and order a gluten-free vegetable suet. That is one thing you won’t find in the free-from aisle, even at Waitrose.

Wine is fine it’s made from grapes which, thankfully, are naturally gluten free. Even whiskey and gin, though made from grains, are okay because they are distilled and the gluten is left behind.

However beer made with malt, wheat, rye and barley all contain gluten. Because the gluten is in solution it is extra easy to get straight into the bloodstream and so makes gluten sensitive flowers really, really unwell.

Fear not. There are many brands of gluten-free beer but they aren’t so easy to source. While you might have to take out a second mortgage to buy them, Asda sell a dark beer called Daura and Marks and Spencer do a very nice gluten-free pilsner.

So this Christmas everyone can raise a glass to the season. Cheers!

Some quick recipes for Christmas To make a quick but impressive pudding buy some gluten free puff pastry from the freezer section (Genius and Dietary Specials both make them).

Roll out gluten free flakey pastry cut into three pieces and put each onto a baking tin lined with parchment.

When they’re cooled, spread good raspberry or strawberry jam and lightly whipped cream on two pieces, placing the last on top.  You can add fruit.

Dredge gently with icing sugar and slice into four or 5 pieces.

Messy to eat, but tastes fab.

If you like to make your gravy by deglazing the roasting pan try this simple alternative. Instead of making a roux with wheat flour pour gluten-free stock into the meat juices in the pan, bring to the boil, mix a heaped spoon of cornflour with water till pourable and slowly whisk into the liquid.

And of course gluten-free Christmas cake and pudding (but these need to be prepared well in advance!