In case you were wondering, should Boris Johnson happen to be out of action for any length of time then it is Victoria Borwick as his statutory deputy who would step in to take charge. Despite the baffling total of seven deputy mayors it is Victoria whom Boris has selected as his first among equals and having chatted with her I can quite understand why. 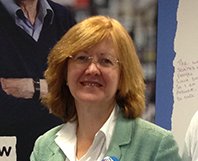 She beams brightly as I walk into the small meeting room on the 6th floor of City Hall and shakes my hand with such warmth that I feel she is genuinely pleased to see me. ‘Empathy’ is the word that comes into my head.

What does the job entail?

Victoria and her team have been sorting some images and documents to show me what she has been up to. The photos she seems most proud of are, contrary to expectation, firstly one of her being lowered through a manhole cover into a sewer and secondly in a hard hat inspecting repairs to the Bakerloo underground tunnel. These photos illustrate what she sees as her primary role – being in touch (literally!) with what goes on across London. 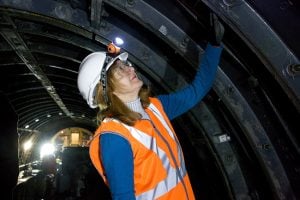 Courtesy of Institute of Civil Engineers

I see myself as the eyes and ears of the Mayor. The constituency of London is vast and Boris has so much to do, a pile of letter and invitations this high…so I try to get out and about and report back to his team as much as I can. I am interested in the people of London, it’s the people that count, isn’t it.

Victoria peppers her conversation with references to the significance of the individual. I am rather persuaded that she means it and that this is not just a mantra churned out for the Press. In fact my impression is she steers refreshingly clear of the mainstream media; whatever drives her, it is not self-promotion.

As we go on it is clear that what she really enjoys doing is making people feel valued, giving them recognition for what they do. This is true whether it’s a woman in business selling greeting cards or Ben Kinsella’s sister going into schools telling pupils about the horrors of knife crime.

Clearly a big chunk of the role is ceremonial (the stuff one associates with Mayors but higher profile, such as attendance at The Trooping of the Colour in the morning and a Red Arrows flypast in the afternoon at Biggin Hill). But, she is very far from all meet and greet. She works on a daily basis with the big pillars of authority in London, such as the Metropolitan Police.

Does she ever take issue with the Metropolitan Police, or any other authority? “Of course…of course.” So the question then is does she have any substantive power? This is tricky to get at and I suspect her real power comes from her powers of persuasion, her people skills if you like, which I would say she has in spades. She raises individual cases with the relevant authorities and leaves me in no doubt that she and her team are rigorous in following through. It is at this point I get my first real glimpse of the steel within.

Her special areas of interest?

Boris and his team set the priorities but I am lucky in being able to have my area of particular interest which is health. She mentions hospices, homelessness and dementia as causes which mean a lot to her but talks particularly about mental health.

If you have a mental health problem you would not choose the police as your natural first port of call, would you?

She is fighting to change that.

Another major area that she keeps coming back to is that of social isolation and the paramount importance of volunteering to “break down these artificial barriers that we put up around ourselves.” She goes on “I am a great volunteerer; I say to people get involved, get involved in your community whether on the PTA or as a reader to children or as a school governor.” Put like this it seems simple.

What’s the hardest thing you’ve had to do?

She doesn’t give specific examples, guarding others’ privacy, but she does say not being able to help people as you would like is really hard and of course being at memorial services for victims.

On a lighter note she mentions just the night before entertaining a Portuguese business delegation and being determined to give a speech in Portuguese even though she speaks not a word of it. “I got through…” she says modestly. As someone who has been to Portugal many times and still can’t ask for a cup of coffee, I am deeply impressed.

What qualities does she bring to the job?

By now I know that she really does not like talking about herself but she does mention empathy as one of her qualities, and she says “I have the time…” I find this last comment extraordinary as I imagine time is and always has been a scarce commodity for her. But judging by her approach to me I would say she gives people a feeling that she has time for them. 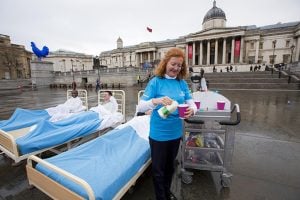 Impossible here not to detect a significant level of hero worship though I suspect it’s two way. “Boris has set the bar so high,” she says with several references to his energy and motivation.

We must all do our best, do what we can.

As for what Boris thinks of Victoria:

“Victoria is a great asset to my team, representing me at events across London and communicating my aims and visions to different communities in the city. She is a role model for women in politics, and has a wonderful empathy that people respond to.”

Praise indeed! Behind every great man…

What would you say to women trying to combine career and family?

She is extremely hesitant to proffer advice but she does say that her own situation was different; two of her four children were extremely ill when young so she simply couldn’t get into her chosen career of politics at an early stage. She doesn’t want to say more and I don’t want to ask her but I do sense a lot of pain. As she herself says with her rather gentle humour,

Everyone has a life story, don’t they?

Is she a role model for other women?

She finds this an odd question as she simply doesn’t think of herself in these terms and stresses again it’s not politicians that make the difference, it’s individuals. Absolutely she wants more women in politics but her belief is that we can make a difference to other women in our everyday lives whatever our role in life.

She leaves me with a quote from Madeleine Albright:

“There’s a special place in hell for women who don’t help other women.”

Victoria Borwick is far too nice a person to wish anyone a place in hell; I think she is all about helping others, women especially, achieve their aims and hopes.

I leave City Hall on a glorious June day when the tube works perfectly, the skyline including the Gherkin, the Cheese Grater and St Paul’s (still hanging on in there) is beautiful, everyone is smiling, and London feels a safe clean place to be…this can’t of course all be down to the Statutory Deputy Mayor but I can’t help thinking she might have had something to do with it!