In June 2013 I sat at the funeral of one of my friends. It was two months before her 40th birthday and she had been fighting breast cancer for about seven years. 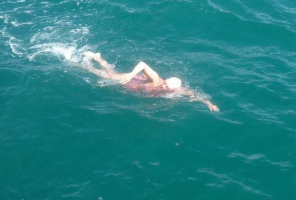 I realised what an inspiration she had been, always so positive and humorous throughout her battle with cancer.  It made me think about how often I might have felt sorry for myself when I really had no reason.

I left the funeral vowing to do something in her memory and a week later I had signed up to swim the English Channel – the 21 miles from England to France – in the summer of 2015.

It’s a huge undertaking – in fact, fewer people have successfully swum the Channel than have climbed Everest.

Back then, I had only just got back into swimming after 15 years of not swimming at all and was doing one mile races in a wetsuit.

Who would have thought that I would become one of less than 500 women to have ever successfully swum the Channel?

As the Channel swimming rules state that you aren’t allowed to wear a wetsuit this meant having to ditch it and start training in 8-16⁰C water.

Having spent the first 18 years of my life in the UAE, the cold water was a shock to my system to say the least!

You can’t just get into the Channel and start swimming – there’s a whole lot of training to be done first. Two years, in fact, which included:

See also  Too busy to exercise? 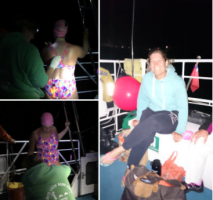 Three weeks before my slot to swim the Channel was due, I got a call from the pilot who would be in the boat next to me escorting me across, asking if I wanted to go early.

I decided to take the opportunity as the weather had been pretty windy for most of the summer and I thought it might be my best chance.

The first five hours of swimming was in the dark, something I had dreaded and really did not enjoy.

But overcoming battles such as this was all part of the challenge.  I was ecstatic when the sun came up and I was able to continue swimming in the daylight.

The water was about 17⁰C when I swam and I was cold throughout but having the sun on my back made such a difference.

I had a great crew on board the accompanying boat, who fed me a carbohydrate drink every half an hour and kept me chipper.

However, in the tenth hour it all went wrong.  I started feeling a pain under my shoulder blade and it got worse as the hours went on.  This meant I missed the tide in France and for the next six/seven hours I was swimming about a mile away from the French shore.  I could see it but I just couldn’t get any closer.

The pain under my shoulder blade meant I was swimming either one armed or backstroke for the final hours until I finally hit the French shores after 17 hours and 19 minutes.

Since my swim many people have asked me both how and why I carried on.  There are a few reasons but the main one was that I had promised myself that I would do this in memory of my friend. 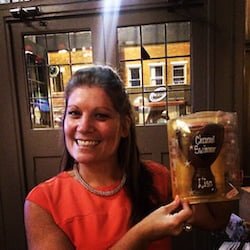 I thought about her a few times through my swim, especially when it was getting hard.  I remembered how strong she had been for so long and in the grand scheme of things this was a short period of suffering I would have to endure.

It gave me great strength and a huge amount of determination to succeed.

For much of my life I’ve suffered from self doubt – although I have achieved some great successes the lack of confidence has always remained.

During my training I would often break down in tears in the middle of Dover Harbour and tell myself I couldn’t do this and why would I think that I could.

But I would carry on swimming until the agreed training time was up, reminding myself why I was doing the swim in the first place and to stop feeling sorry for myself.  The challenge both during the training and the Channel crossing showed me that I am stronger than I thought.

That courage, determination, commitment and inspiration can get you through anything you put your mind to.  It truly is amazing what you can do when you really want something but more importantly when you have a good reason to.

From the swim, I have been able to raise over £10,000 for the Royal Marsden cancer charity in memory of my friend.  This is something that will now mean others will benefit from the research that the Royal Marsden do.

I thank my friend for inspiring me to do this, it is just a shame that she never got to see how she has helped me. It has not only taught me so much about myself but also made me realise that ordinary people who are busy trying to live a healthy work/life balance can achieve incredible things.

I now plan to pass on her inspiration and go on to inspire others to achieve something that they never thought they would.  You really can achieve anything you want to when you put your mind to it.

Swimming the Channel: the facts

Lisa’s video on swimming the Channel